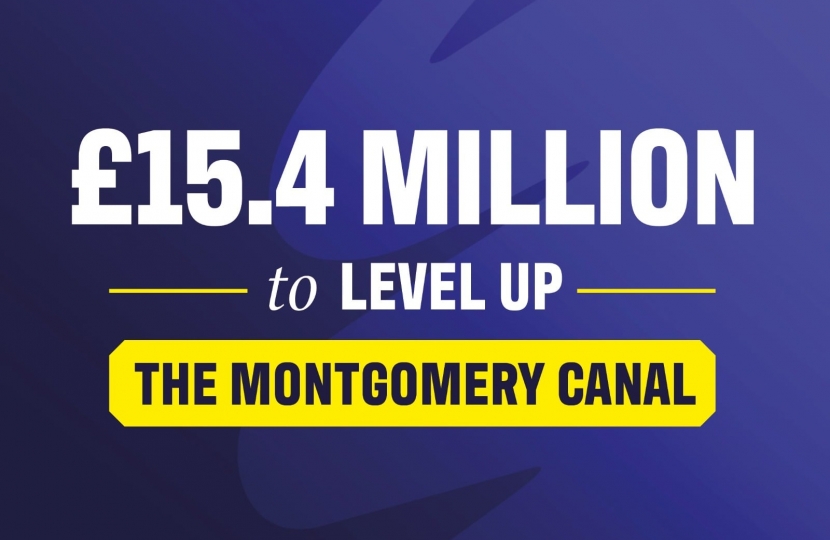 The Chancellor of the Exchequer announced today in his Budget speech that Powys County Council’s Levelling Up Fund bid, supported by the Canal & River’s Trust, has been successful. This will see close to £16m worth of investment granted by the UK Government to fund works that would restore the Montgomery Canal. The approved funding will also be a major contributory factor to the final aim of restoring the Canal to the national canal network. The project will specifically focus on progressing the restoration of navigation to a 4.4-mile section from the Wales-England border at Llanymynech to Arddleen.

“Today represents a milestone day in Montgomeryshire’s history, after decades of local campaigning. I am thrilled that Powys County Council’s Levelling Up Fund bid to restore and reconnect Montgomery Canal to the national network has been successful. This will transform Montgomeryshire’s economy in opening up so many opportunities, and will finally see one of the UK’s most picturesque attractions returned to its former glory.

“I would like to thank the Chancellor and my HM Treasury colleagues for approving the funding. It is clear that Montgomeryshire is central to the UK Government’s plans for a more visible and active role within Wales through the Levelling Up Fund, as well as the Mid Wales Growth Deal. The restoration of the Canal will bring real investment, real growth and real jobs to Montgomeryshire’s communities.

“I would also like to pay my wholehearted tributes to all of the fantastic volunteers at the Montgomery Canal Partnership and Montgomery Waterway Restoration Trust, who have campaigned tirelessly for decades and dedicated so much of their personal time to restoring sections of the Canal, in conjunction with the Canal & Rivers Trust and my predecessor Glyn Davies. Also not forgetting the huge commitment of previous campaigners such as Claude Millington, whose devotion to the cause proved a massive driving force for the campaign. It goes without saying that today’s announcement would never have been possible without all of their efforts and hard work.”

“I am absolutely thrilled by the announcement from the UK Government on this huge investment into Mid Wales to restore the Montgomery Canal. This will provide a much-needed boost to the local economy and will benefit both Montgomeryshire residents and visitors to the area.

“I look forward to seeing the project commence as soon as possible and to taking a ride along the whole of the restored Montgomery Canal!”