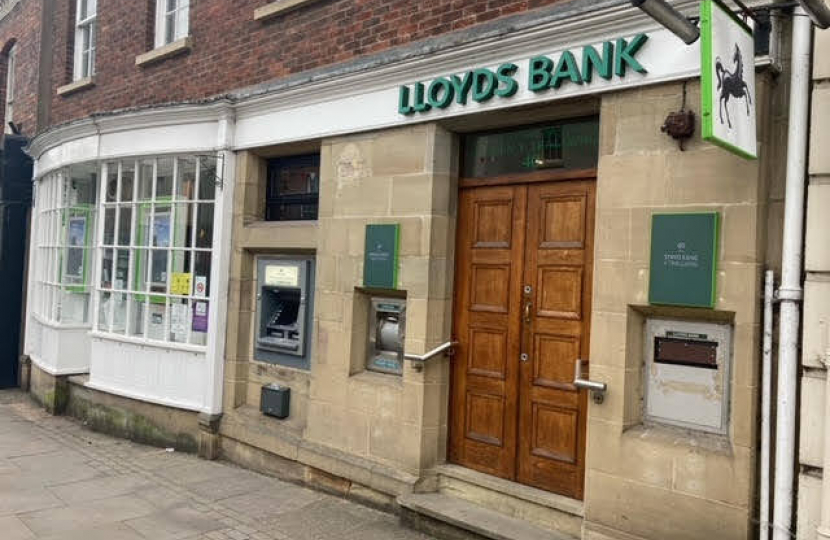 Lloyds have today (20th July) announced that its Welshpool branch will be closing on 26th January 2023, stating that the decision has been taken in response to the changing behaviour of how customers bank.

Lloyds have confirmed that there will be no redundancies, as branch staff will be utilised for other roles within the business. Customers will be able to access day to day banking services at the Post Office, and a community banker will also be made available within Welshpool to assist customers following the branch’s closure.

The branch closure has also been reviewed by LINK – the UK’s Cash Access and ATM network – to assess the effect of bank branch closures on communities and identify where new shared facilities are needed. LINK has now recommended that a new permanent banking hub be opened in Welshpool, with further information to be provided in due course.

“Lloyds’ announcement that it will be closing its Welshpool branch is of course exceptionally disappointing news. Whilst I am relieved that Lloyds have assured me there will be no staff redundancies, their decision represents an enormous blow to its customers and local businesses, as well as Welshpool as a whole.

“I will be holding urgent discussions with Lloyds’ representatives imminently to discuss this decision in more detail, including its plans to implement a community banker within Welshpool. Above all else, I want to ensure Lloyds’ loyal customers are not completely disenfranchised by this move and that the support they require remains available.

“Following Barclays’ decision to close its Welshpool branch in September, Lloyds was to be the last remaining bank with a physical footprint within the town. It is my firm view that there remains a strong need for banks to maintain a high street presence within rural communities.

“It is therefore of some comfort that LINK will be establishing a permanent shared banking hub within Welshpool. Over-the-counter services remain of vital importance to many customers who prefer not to bank online, or who are simply unable to given the nature of rural constituencies such as Montgomeryshire. I look forward to discussing with LINK how this will be implemented soon.”

Craig Williams MP has expressed his concern and disappointment over Barclays’ plans to close its branches in Welshpool and Newtown, and is seeking urgent assurances that its banking services will be protected for its customers.