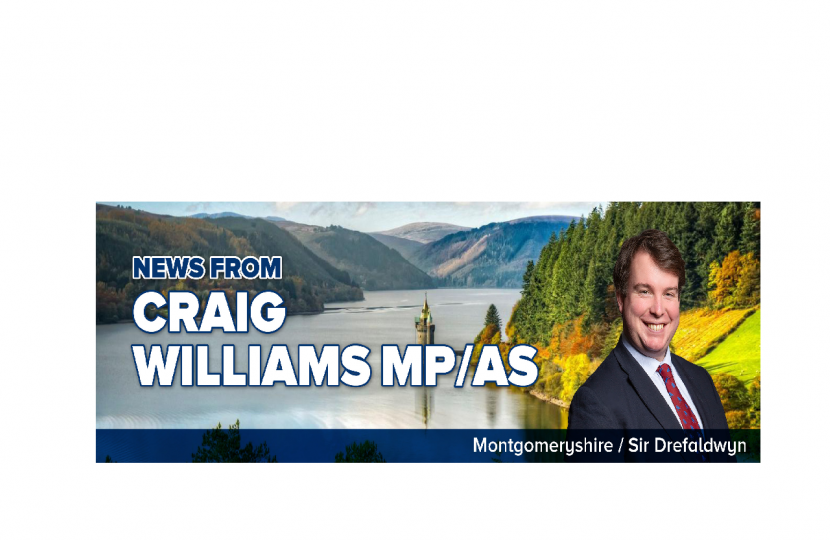 In recent months, I have been focusing on ensuring that the UK Government is putting its money where its mouth is by providing significant investment into Montgomeryshire, through the introduction of several schemes and packages which will deliver on its promises to level-up the UK and inject real growth to the area.  The Levelling-Up Fund will see millions of pounds granted to Powys to work up new projects, with the aim of investing in local infrastructure which will have a visible impact on Powys’ residents and communities, such as transport schemes, regeneration projects and cultural assets. It has been a real highlight of my job to discuss so many varied projects with public, private and social enterprises across the county. I am really excited by the breadth of projects for our area – of course not all can be successful within the first round, but I’ve no doubt that we have a bright future ahead in Montgomeryshire.

The UK Government, alongside the Welsh Government, have also signed off on £110 million of investment for the Mid Wales Growth Deal, which will focus on strategic growth areas such as digital infrastructure, transport, agriculture and tourism. This adds to the UK Government’s commitment to the building of a Llanymynech A483 bypass, forming part of its strategy to overhaul and improve direct transport connections and movement of goods between all four nations of the UK.

In addition, Openreach and the UK Government have recently announced that 140 exchanges across Wales will be upgraded, including within Caersws, Forden, Llanidloes, Machynlleth and Newtown. This will enable access to full fibre broadband for an extra 9,000 premises within Montgomeryshire, and forms part of the UK Government’s target of delivering ‘gigabit capable broadband’ to 85% of the UK by 2025. I continue to work on tackling ‘not spots’ in Montgomeryshire and have been working with the UK Government and internet providers to ensure this is also at the forefront of the UK Government’s priorities. This has been shown with the instillation of new mobile network masts across Mid Wales, which will initially support Emergency Services before shortly being adapted for public use. This is a massive step towards giving the whole of Montgomeryshire the connectivity we need to flourish.

These investment packages reiterate that despite all of the challenges brought on by the Covid-19 pandemic, we are committed to getting on with the day job. Our pledge to “level-up all parts of the UK” will be strongly felt in Powys, maximising potential and creating major new opportunities for our area. 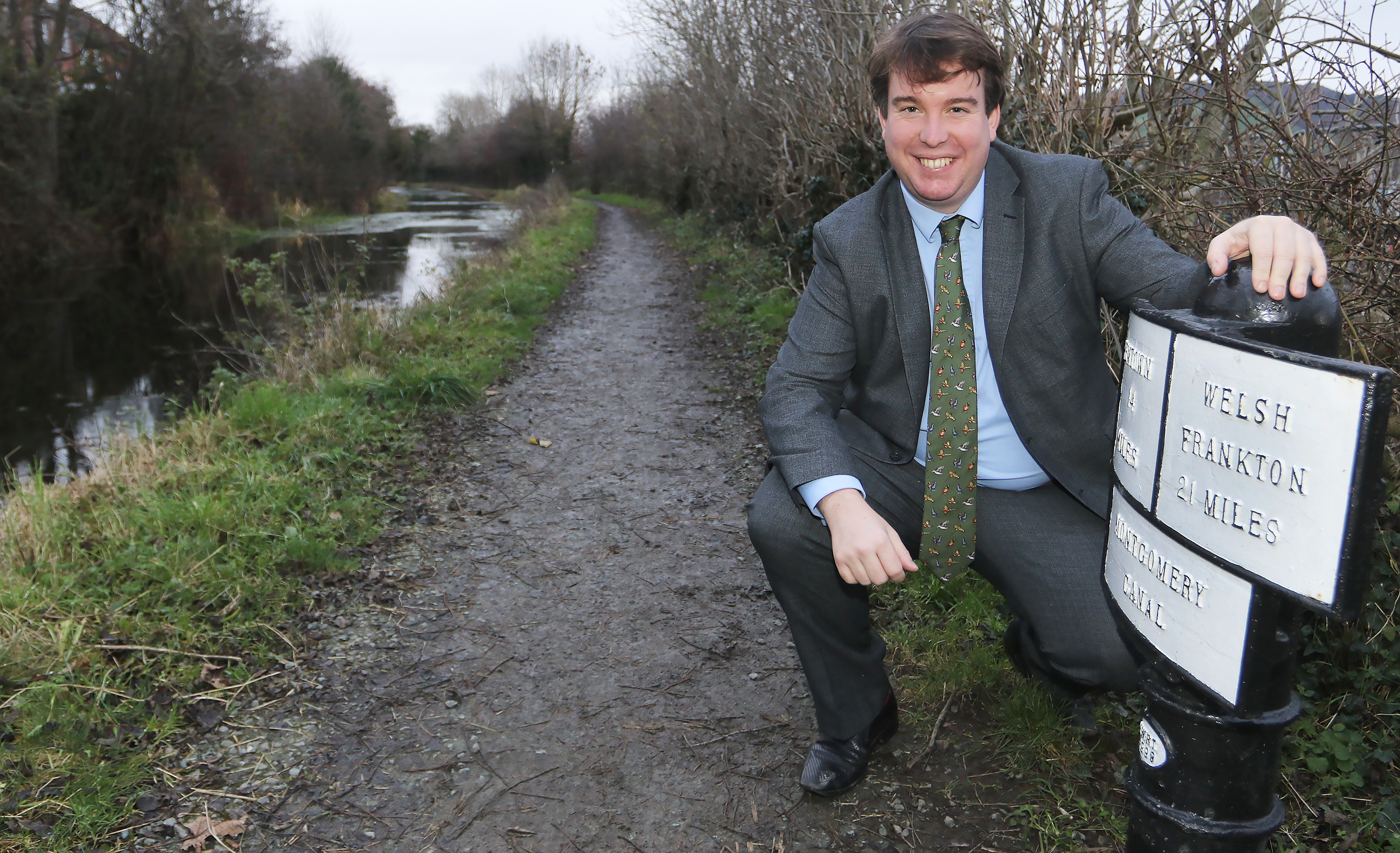 Projects such as the restoration and reopening of the Montgomery Canal will gain from UK Government funding, providing a landmark visitor attraction that will be of huge economic boost to Montgomeryshire
Picture by Phil Blagg Photography

With a new Queens speech comes a new Parliamentary year, and I've been busy taking a close look at the detailed proposals and laws planned for this Parliamentary session.

There are some key pieces of legislation lined up for the next session such as a Building Safety Bill, a new Employment Bill, Health and Care Bill, Renters Reform Bill and many others, including reforming the Mental Health Act and Adult Social Care. This is on top of the huge amount of work already being carried out by the UK Government to support the Covid Recovery.

As well as working with colleagues and scrutinising these Bills in Parliament, I have been working as a member of the International Trade Select Committee, taking an in depth look at the Government's work in negotiating trade deals with many of our international partners. I also work with two other Parliamentary committees and numerous All Party Parliamentary Groups. 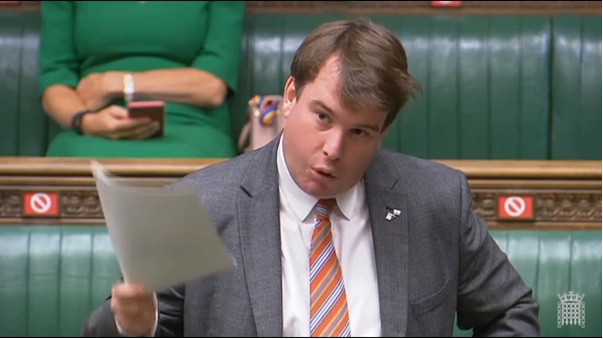 I was delighted to have been involved with the inaugural Montgomeryshire Community Awards in the Spring – a fantastic initiative designed to celebrate many of those individuals, organisations and businesses who have gone above and beyond during the past year. We were overwhelmed with the number and quality of nominations received and judging proved incredibly difficult. However Judges Angela Owen (Head of Internal Services with Powys Association of Voluntary Services), Thom Kennedy (Editor of Powys County Times), Yasmin Bell (Chief Executive Officer of Citizens Advice Powys), Paul Hawthorn (a Co-Founder of the Awards) and myself did of course have to reach decisions on the five categories. Three finalists were chosen in each category with the Winners announced via a Virtual Ceremony on May 21st, and they were:

Volunteer of the Year – Leon Shearer
Leon was nominated for the wide range of support he has given to the community of Abermule during lockdown. Amongst the long list he organised, collected and delivered over 500 prescriptions, set up a regular ‘ring round’ of vulnerable people to check on their welfare, organised online events and online training, streamed videos of past productions by Young Farmers, the School and Drama Society and supported the sixteen organisations associated with Abermule Community Centre. 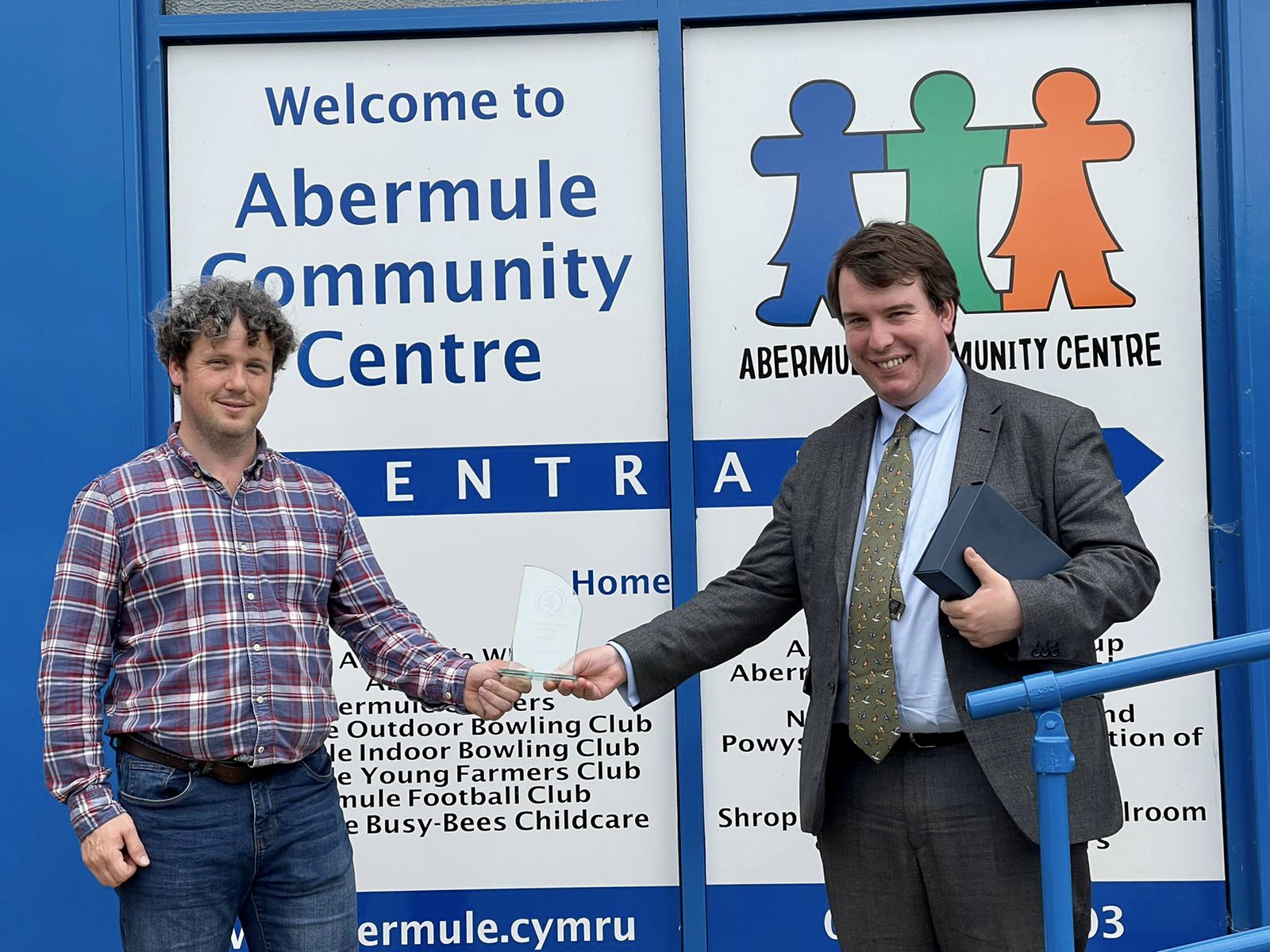 Key Worker of the Year  - Amy Coyle
Amy is the Manager of Phoenix Home Care and Support in Newtown and received several nominations from service users and staff. Working flat-out over the past year, seven days a week and available at any time of the day or night, Amy has made sure everyone involved with Phoenix has been well supported. As Manager Amy is mainly office based but, in an emergency, will go out herself to help clients. 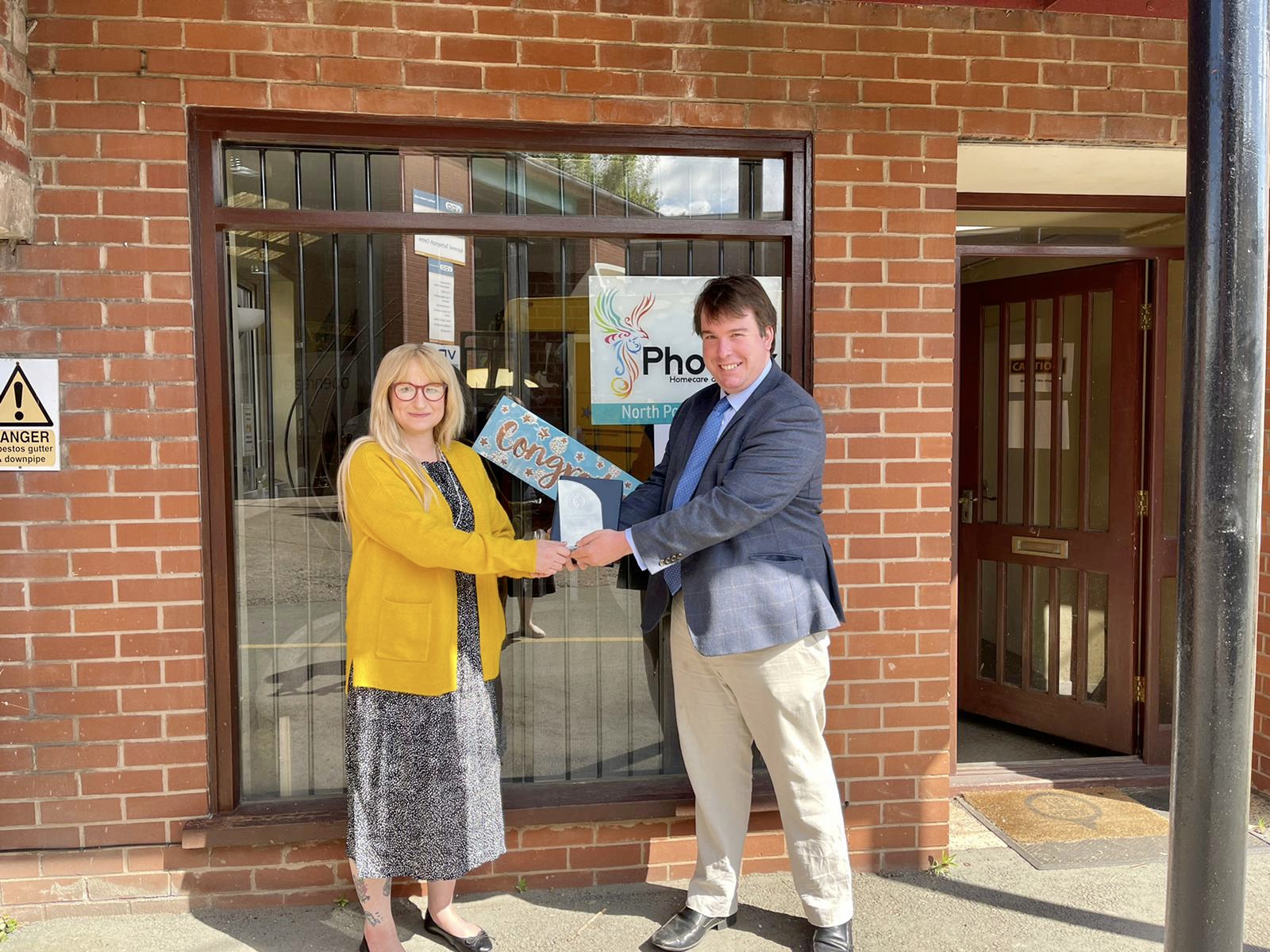 Business of the Year - Lewis of Llandrinio
The nomination for Lewis of Llandrinio included many letters of support from local people, praising their pivotal role in the area. A family owned and run convenience store, post office and petrol station, Lewis of Llandrinio are at the centre point of the village. Since the start of the pandemic they have introduced new initiatives including designated personal shoppers, a volunteer delivery service and regular phone check-ins with those living in isolation. 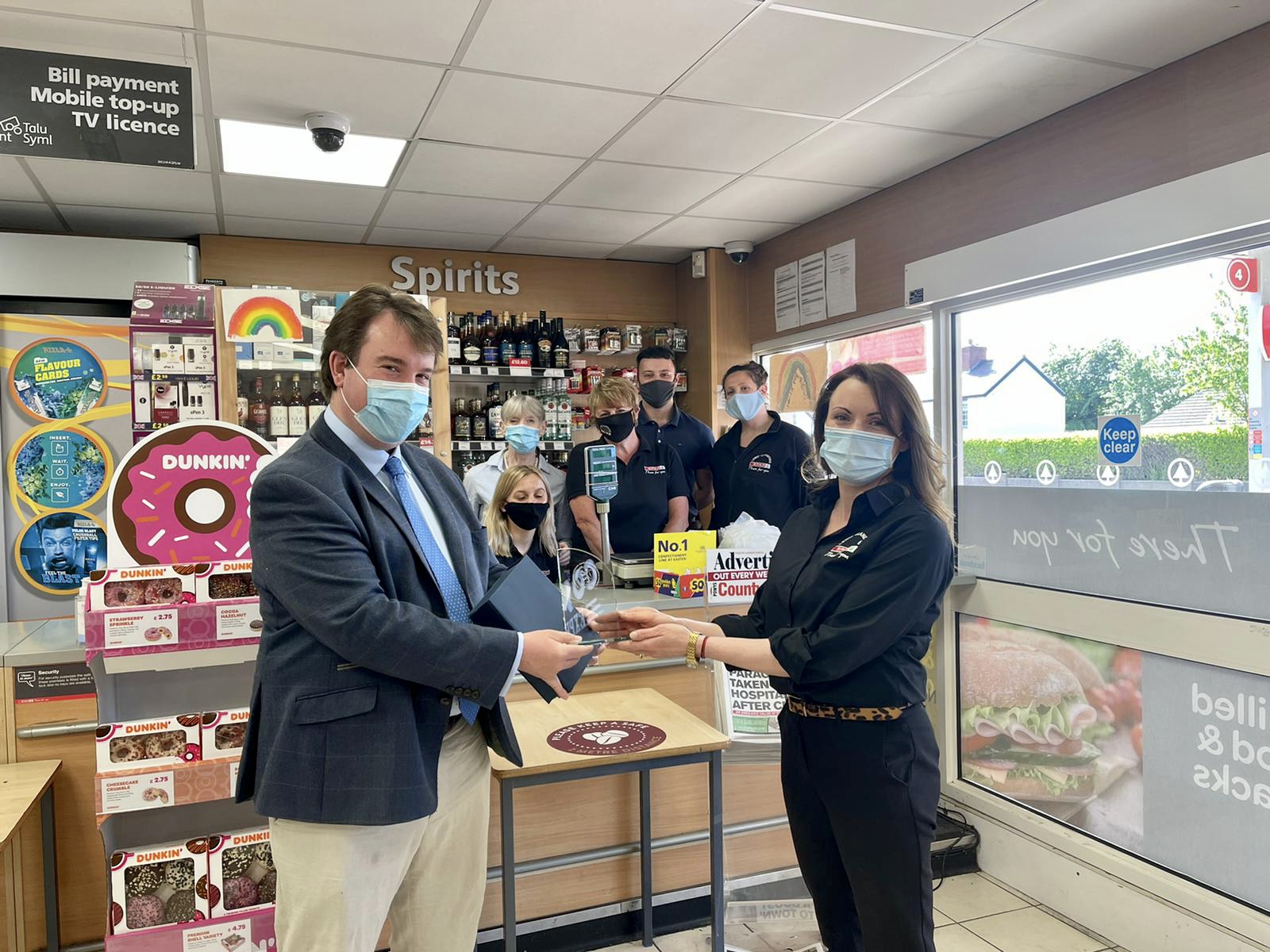 Young Person of the Year - Eva and Ella Martuccio
Eva and Ella from Llanrhaeadr-ym-Mochnant are just 10 and 8. In January of this year they began undertaking regular litter-picks around the village. They have continued to do this every week after school and have collected dozens of large black bags of rubbish which was spoiling roadsides, paths and hedgerows. In February they encouraged others to volunteer with them and then set up ‘Llanrhaeadr Litterpickers’. This group not only provides a great service to the community, but has also developed to become a vital social group for those who became isolated during the pandemic. 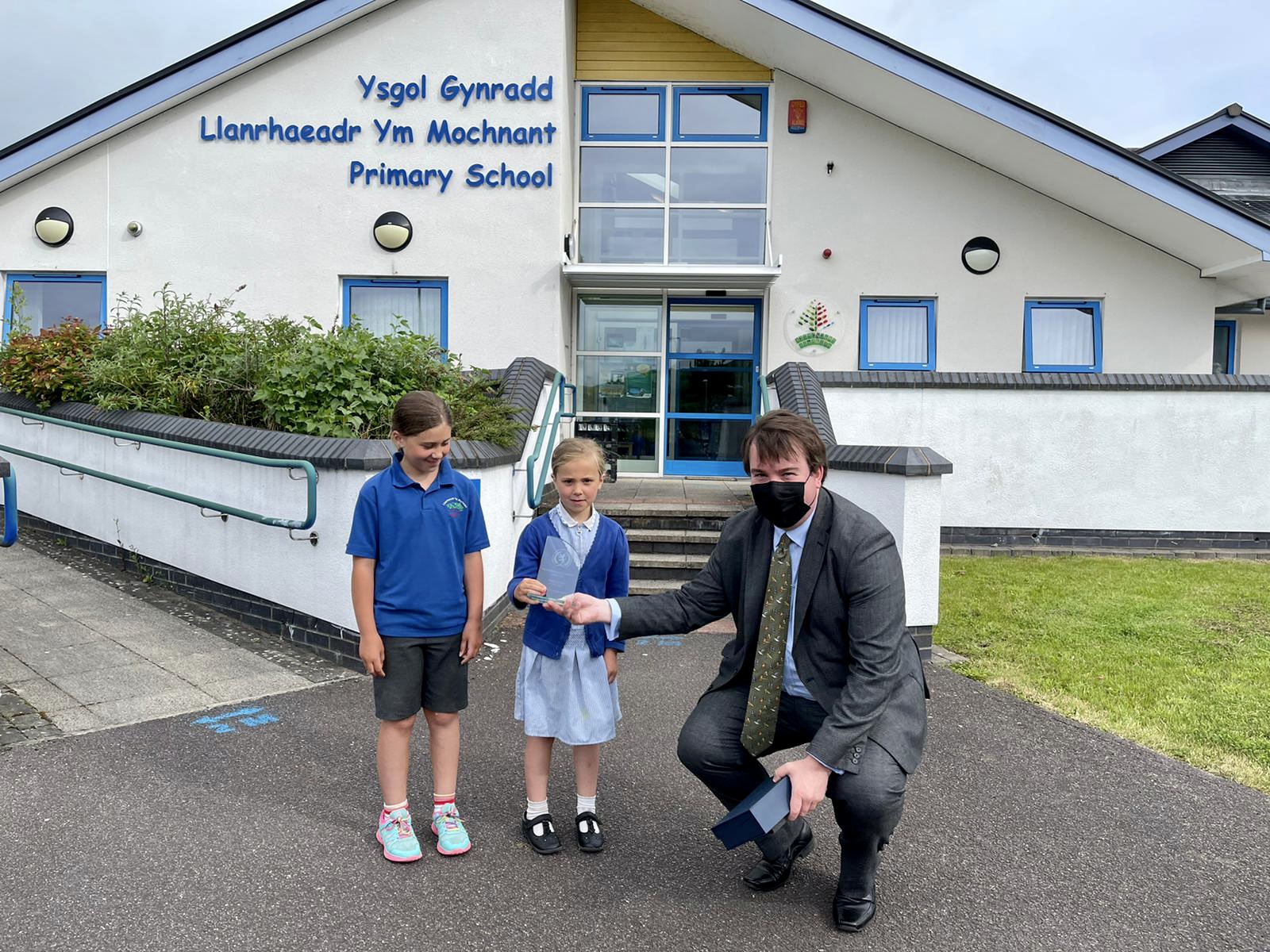 Community Group of the Year - Powys Covid-19 Vaccination Volunteers
The nomination for the Powys Covid-19 Vaccination Volunteers marks the incredible effort made by local people and partners to deliver the extremely successful vaccination programme here in Montgomeryshire. The volunteer programme has been part of a huge structure, co-ordinated by Powys Teaching Health Board. Hundreds of local people have volunteered their time to make this happen, with tremendous support from Powys Association of Voluntary Organisations. The Awards were run in partnership with Powys County Times and generously sponsored by Charlies, Express Café Newtown, CellPath, Iceland and MP Foulkes. Plans are already afoot for 2022!

As restrictions have begun easing in Wales over recent months, I have been visiting businesses, organisations and residents across Montgomeryshire. It has been brilliant to finally be able to get out and meet you in person again, and also appreciate just how lucky we are to reside in such a beautiful area. I am extremely keen to make up for lost time and meet as many of you as possible across the breadth of constituency over the summer, so please let me know if you would like me to visit you.